My name is Miho Ishikura, I'm originally from Shimane prefecture, Japan. I've been running San Francisco PostgreSQL User's Group in San Francisco. I'm a Java and Ruby software engineer and am most familiar with web application using PostgreSQL as a backend database. I'm also very passionate about XP (eXtreme Programming) and TDD (Test-Drive-Development). I worked in Tokyo for over 5 - 6 years then moved to San Francisco about 4 years ago. Since I used PostgreSQL version 7.2 years back I'm all about PostgreSQL :)  I currently work for ezRez Software, Inc. and PostgreSQL Experts, Inc.  At ezRez, we often host SFPUG (San Francisco PostgreSQL User's Group) and our company is very proud to contribute open source technology such as PostgreSQL by hosting meeting. This is at least we can do to contribute back to PostgreSQL community, we think.

San Francisco is one of the most tourist attractive city in the US, there are always many tourists coming from all over the world. San Francisco is famous for being super left wing and liberal, such as political view, gay rights, eco-friendly (hybrid cars, bicycles and recycling...etc)... What I like about San Francisco the most is mixed culture, south America, Asia, India, Europe...etc, you name it. It just makes things so much richer and interesting with bonus of variety of yummy food options! :)

And of course, Silicon Valley. San Francisco is part of Silicon Valley and there are many big name computer companies in the city and within 1 hour commute. It's so common to be working for computer related work in the city, you will often hear technical conversations from people on the street, restaurants, pretty much everywhere. There are always start-up companies here and there even in this bad economy.

Interestingly, when it comes to engineers in Japan, you might imagine quite geeky figure, but in San Francisco city, it's not always the case. Not too worry, there are always geeky ones here for you too :)

PostgreSQL in the US

In Japan, we all know PostgreSQL is well established choice of database for your small to enterprise level applications. However for some reason, in the US, it's not quite there yet based on my observation. I still meet engineers who have never heard of PostgreSQL time to time. Even in computer central San Francisco, it's not easy to hire DBAs who have well experienced with PostgreSQL. I often see that, once they experienced using PostgreSQL, they are very impressed and ask me "Why PostgreSQL is not so popular?". I always don't know what to answer to that, but I'm guessing it's to do with publicity, perhaps Windows support, replication solutions, non-downtime version upgrade...? Honestly it's still a big mystery to me. 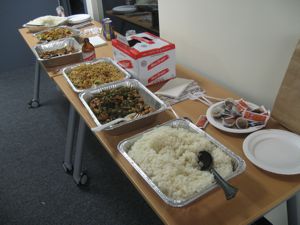 Despite the popularity of PostgreSQL in the US, SFPUG has been quite successful. We have meetup every month, typically in San Francisco city and East bay (Oakland and Berkeley area). We are trying to have meetup in South bay (San Jose and Mountain view area) as well. We usually have 20 to 30 attendees every meeting. We have volunteers who would like to give us presentation every month. There are talks like case study, applications using PostgreSQL and introduction to particular feature of PostgreSQL. Recently we had presentation of use case for cloud computing with PostgreSQL, PostGIS, BI using PostgreSQL, scalability with PostgreSQL and Ruby on Rails.

What is like to attend SFPUG? Well, food and drinks are provided by either presenter or meeting host (see the picture aside, it was Chinese food this time, yum!). Usually we start with news and announcements such as next PostgreSQL release schedule, asking for beta-testing, new minor/patch releases, up-coming events and conferences, who is hiring and such. Then we will move on to actual presentation, usually up to 45 minutes or so. We also ask for donation to PostgreSQL by handing out T-Shirts and such in the end of meeting. After that, we will go out for drinking for more discussions :) 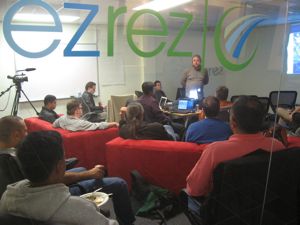 At SFPUG meetup, we have regular attendees like Josh Berkus, David Fetter along with PostgreSQL hackers, DBAs and developers who use PostgreSQL daily basis (like me). Every meetup, there are always new faces which is very exciting for us. We always try to welcome new comers and also try to satisfy PostgreSQL pros. SFPUG has a good atmosphere for discussion, exchanging opinions and making connections. We have a very good reputations so far. (see the picture aside)

Now SFPUG has entered the new era of meetup this year. We have started streaming broadcast. We shoot video during the meeting so that people who are not at the meeting can watch the meeting real time and also submit questions at the same time! On top of that, we publish meeting videos here for anyone in the world to join SFPUG meetup anytime they want.

You can also check this web page for you to sigh up for attending meeting and see schedule and venue, which I found very important in terms of organizing meetup and also to make it transparent for everybody. SFPUG doors are wide open to everyone!

It's been quite exciting working closely with PostgreSQL communities in the US. I have met many people who are passionate about PostgreSQL. Recently I have attended PGCon in Ottawa, Canada for the first time. As a lot of conferences have been losing attendees during this economy, PGCon stood out by increasing number of attendees this year, which is quite encouraging. I'm very proud to be part of this incredible open source software that has been proving the concept of open source and continue to grow community and technology. We couldn't have been here as a leader of databases and open source softwares without help and contribution from each one of you. Our PostgreSQL future is super bright!